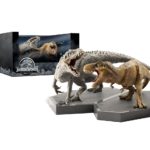 If you're a fan of the "Jurassic" movies then this collectible limited edition box set for Jurassic World might be up your street. It comes with 3 blu-ray discs including lots of extra content as well as multiple versions of the movie Blu-ray 3D, Blu-ray, DVD and Digital HD. But what's really interesting from a collectible point of views are the pair of dinosaurs. See photos … END_OF_DOCUMENT_TOKEN_TO_BE_REPLACED

Image via WikipediaIndiana Jones. Cinema icon?Whether you liked the last chapter in the Indiana Jones series the soundtrack was fantastic - at least I thought so!So what about the soundtracks from the other films?While you could get them individually you can now get the entire lot as a special edition boxset, which looks pretty nice. The only downside to boxsets is storing … END_OF_DOCUMENT_TOKEN_TO_BE_REPLACED