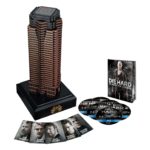 Die Hard is a classic. The John McTiernan film was first released in 1989 and made a star of Bruce Willis, while also immortalising Nakatomi Plaza. There are several box sets and special editions of both the original film and its sequels, but this version wins in terms of "coolness", as it includes a miniature model of Nakatomi Plaza tower:   The boxset also … END_OF_DOCUMENT_TOKEN_TO_BE_REPLACED