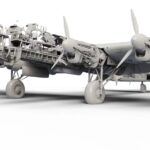 The Avro Lancaster was one of the RAF's main bombers during the Second World War. If you've got even a passing interest in planes you'll probably know about it. Most models of bombers are either 1:72 or 1:48 scale. Anything bigger than that starts to become both unwieldy and expensive. That doesn't mean that kits of planes in 1:32 1:24 and other scales don't exist. They … END_OF_DOCUMENT_TOKEN_TO_BE_REPLACED