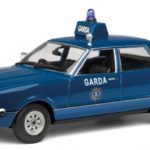 Corgi have just released a new scale diecast car. It's a 1:43 scale Ford Cortina Mk 4 1.6 L model based on the ones used by the Irish police ie. An Garda Síochána. Apparently the cars were acquired due to Ford having a factory in Cork: An Garda Síochána, the Republic of Ireland's police force, used the Cortina Mk4 extensively because of its reliability and … END_OF_DOCUMENT_TOKEN_TO_BE_REPLACED