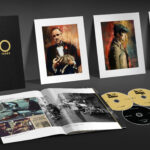 The Godfather was first released in 1972. The film, based on the novel by Mario Puzo, would go on to win multiple Oscars and become one of the iconic films of the 20th century. Paramount are bringing it back to the big screen over the next couple of months with screenings of all three films at various times in select cinemas. They're also doing a special edition release … END_OF_DOCUMENT_TOKEN_TO_BE_REPLACED