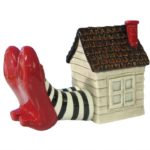 The Wizard of Oz is a classic. As a child I found some of the scenes incredibly scary. So what about some of the films characters? While we might all remember Dorothy, Scarecrow and Tin Man, the evil witches were the ones that scared us all as children. The Wicked Witch of the East meets her end when Dorothy's house lands on her and all that's left are her feet sticking … END_OF_DOCUMENT_TOKEN_TO_BE_REPLACED

The Wizard of Oz (the original not that horrendous remake) is a great film. As a child it used to give me nightmares, so the idea of a Barbie Wicked Witch of the West struck me as a bit odd, but I'm not exactly a Barbie expert....In any case Mattel are releasing a Wizard of Oz collection of Barbie dolls for late 2008 / early 2009, as it's the 70th anniversary of the film's … END_OF_DOCUMENT_TOKEN_TO_BE_REPLACED